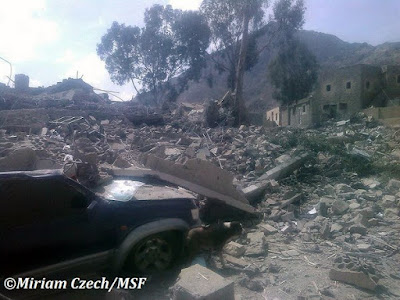 The small hospital, in the Haydan District in Saada Province, was hit by several airstrikes beginning at 10:30 p.m. last night. Hospital staff and two patients managed to escape before subsequent airstrikes occurred over a two-hour period. One staff member was slightly injured while escaping. With the hospital destroyed, at least 200,000 people now have no access to lifesaving medical care.

"This attack is another illustration of a complete disregard for civilians in Yemen, where bombings have become a daily routine," said Hassan Boucenine, MSF head of mission in Yemen.
Video: Firsthand Reports from the Conflict in Yemen

The bombing of civilians and hospitals is a violation of international humanitarian law and MSF is demanding that coalition forces explain the circumstances around the attack in Haydan. The hospital’s GPS coordinates were regularly shared with the Saudi-led coalition, and the roof of the facility was clearly identified with the MSF logo.

"Even 12 hours after the airstrike, I could see the smoke coming out of the facility," said Miriam Czech, MSF project coordinator in Saada. "The inpatient department, the outpatient department, the maternity ward, the lab, and the emergency room are all destroyed. It was the only hospital still functional in Haydan area," she said.

MSF began supporting the hospital in May. Since then, roughly 3,400 patients were treated, with an average of 200 war-wounded patients admitted to the emergency room per month.

"Yemen is in an all-out war, in which the population caught on the wrong side is considered a legitimate target," said Boucenine. "Markets, schools, roads, bridges, trucks transporting food, displaced persons' camps, and health structures have been bombed and destroyed. And the first victims are civilians."

MSF’s priority is to reestablish a new health facility as soon as possible, in order to maintain the provision of health care to the population of Haydan. 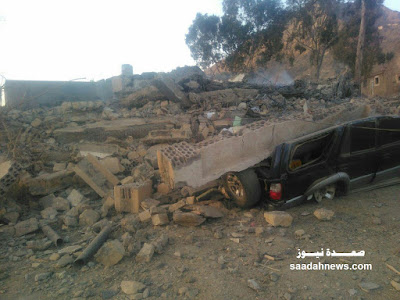 This is Amnesty International's statement:


Yemen: Bombing of MSF hospital may amount to a war crime


The apparently deliberate targeting and destruction of a hospital supported by Médecins Sans Frontières (MSF) in northern Yemen last night, which may amount to a war crime, demands an urgent, independent and thorough investigation, Amnesty International said today.

According to sources on the ground, at around 11.30 pm on 26 October the Saudi Arabia-led coalition forces allegedly carried out up to six consecutive airstrikes on Haydan Hospital, located in the Haydan Directorate in Sa’da governorate. The hospital had more than 20 people inside at the time, including three patients and various medical and other staff members. Seven staff members were injured, but could not be taken to another hospital 60km away in Sa’da until 7am due to fears of further strikes.

“The attack on Haydan Hospital appears to have been an unlawful attack causing harm to civilians and civilian objects. The consecutive airstrikes show deliberate targeting of the medical facility - this is another sad day for civilians,” said Philip Luther, Director for the Middle East and North Africa at Amnesty International.

“Hospitals and medical units must be respected and protected in all circumstances - they only lose their protection against attack if they are used for military purposes - and the destruction of this one means the loss of vital humanitarian treatment for civilians across four directorates of northern Yemen."

MSF staff confirmed the attack, saying they witnessed two consecutive airstrikes before fleeing the hospital compound. Three to four further airstrikes were reported, coming around five minutes apart. According to Hassan Boucenine, MSF head of mission in Yemen, the Saudi Arabia-led coalition has the coordinates of all MSF hospitals in Yemen, including Haydan Hospital.

According to the hospital’s director Dr Ali al-Mughli, the hospital is now completely destroyed with the exception of the storage rooms. He said that while the hospital often receives injured fighters, there was no military activity in the hospital at the time of the attack.

Haydan is 60km south-west of Sa'da city, where the injured have now been taken. Dr Ali said there was a delay in taking them to the city’s al-Jamhouri hospital because airstrikes have been targeting convoys of people, meaning that even ambulances are not safe. The hospital also lost 60 litres of petrol and 1,000 litres of diesel in the strike, a huge loss at a time when fuel supplies are scarce.

This is not the first strike on a hospital in Sa'da since the Saudi Arabia-led coalition’s military intervention in Yemen began last March. On 4 September 2015, the coalition reportedly bombed al-Sh’ara hospital in Razih, in the west of Sa’da governorate, resulting in the killing of six patients and the injury of six others. MSF personnel who visited the site afterwards said there was no evidence that the hospital was being used for any military purposes.

“We call on all parties to the conflict to respect and protect medical personnel and units and take every precaution to protect civilians caught up in the conflict. There must be an independent investigation into why hospitals and their patients are being targeted, rather than protected, as international humanitarian law requires,” said Philip Luther. 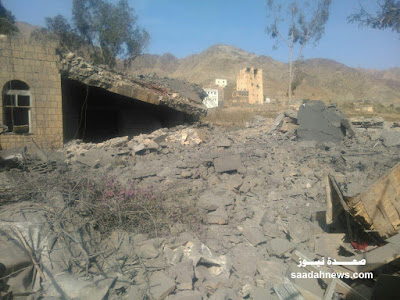 
The airstrikes by a Saudi-led coalition on a hospital in northern Yemen supported by Doctors Without Borders (Medecins Sans Frontiers, MSF) on October 26, 2015, was in apparent violation of the laws of war. The attack with a half-dozen bombs destroyed Haydan Hospital, the only medical facility in the town of Haydan in the northern governorate of Saada, about 30 kilometers from the Saudi border. Two patients were injured during the evacuation of the hospital.

The MSF Yemen country director, Hassan Boucenine, told Human Rights Watch that the first strike hit the left wing of the building at about 10:30 p.m. After the first explosion, all of the patients and staff members in the hospital – there were at least 12 at the time – fled the building. Aircraft then dropped about five more bombs on the hospital, including two that did not explode and are still in the building.

“The bombing of a hospital is shocking amid increasing reports in Yemen of civilian deaths from coalition airstrikes,” said Joe Stork, deputy Middle East director. “Bombing a hospital sends a message that all medical facilities, health workers, and patients are at grave risk.”

Boucenine said that, as is standard practice to avoid becoming a target, MSF had first supplied the health center’s coordinates to the coalition about six months ago and reconfirmed them at least once a month since then. The hospital had the MSF logo and name painted on its roof.

Haydan Hospital receives support, including funding to cover staff salaries and medical supplies, from MSF, Boucenine said. It is the only medical facility within an 80-kilometer radius, and usually receives about 150 emergency cases a week. Since May 2015 the facility has treated about 3,400 wounded. The facility is now closed.

A Yemeni Health Ministry official told MSF that the attack completely destroyed the emergency room, outpatient and inpatient departments, lab, and maternity ward, and severely damaged the windows and walls of the building. The only departments that were undamaged were the x-ray department and the medical staff room.

Brig. Gen. Ahmed al-Assiri, the coalition military spokesman, told Reuters that “coalition jets had been in action over Saada governorate” but had not hit the hospital.

Since the beginning of the Saudi-led coalition air campaign on March 26, Human Rights Watch has documented more than two dozen airstrikes that appeared to be in violation of the laws of war. Human Rights Watch has not been able to ascertain that Saudi Arabia or other coalition members are investigating a single airstrike. In some instances the coalition has denied that the attacks Human Rights Watch documented were unlawful, but has not provided information to support those claims. The coalition should open an impartial, thorough, and transparent investigation into the bombing of Haydan Hospital to establish the circumstances of the attack, and make its results public. Anyone responsible for committing a war crime should be fairly prosecuted.

International humanitarian law, or the laws of war, applies to all sides in the fighting in Yemen. Deliberate or indiscriminate attacks against civilians and civilian structures are prohibited. The laws of war require that the parties to a conflict take constant care during military operations to spare the civilian population and to “take all feasible precautions” to avoid or minimize the incidental loss of civilian life and damage to civilian objects.

Hospitals and other medical facilities are civilian objects that have special protections under the laws of war. They only lose their protection from attack if they are being used, outside their humanitarian function, to commit “acts harmful to the enemy.” Even if military forces use a hospital to store weapons or deploy able-bodied combatants, the attacking force must issue a warning to cease this misuse, setting a reasonable time limit for it to end, and attacking only after such a warning has gone unheeded.

The United Nations Security Council should remind all parties to the conflict in Yemen, including coalition members, that anyone responsible for “planning, directing, or committing acts that violate applicable international human rights law or international humanitarian law, or acts that constitute human rights abuses” is potentially subject to travel bans and asset freezes under resolution 2140. The resolution, passed in February 2014, established a sanctions committee with a mandate to sanction individuals found to be engaging in or providing support for acts that threaten the peace, security, or stability of Yemen.

The coalition has carried out many strikes near Haydan Hospital since the beginning of the war, Boucenine said. He added that the hospital is in a village of mostly clay huts in which there was no fixed military target in the vicinity. There have been no allegations that Houthi forces are in the area or that the hospital was being used for military purposes.

The Saudi-led coalition, which includes the United Arab Emirates, Bahrain, Egypt, Jordan, Kuwait, Morocco, Qatar, and Sudan, has conducted an aerial campaign since March 26, 2015, throughout Yemen against Houthi forces, also known as Ansar Allah, who have controlled much of Yemen since late 2014.

The United States has said that it is providing the coalition with logistics and intelligence support. The United Kingdom has said that it is “providing technical support, precision-guided weapons and exchanging information with the Saudi Arabian armed forces through pre-existing arrangements.” Providing direct support to military operations, such as information on targets and refueling aircraft, could make the US and the UK parties to the armed conflict, and bound to apply the laws of war, including the obligation to investigate alleged violations.

The Houthis and other forces have also been responsible for indiscriminate attacks and other laws-of-war violations, Human Rights Watch said. Houthi and allied forces and opposition militias have engaged in military operations around Aden, Taizz, and other areas that have repeatedly put civilians and civilian structures such as hospitals at unnecessary risk.

“Again and again, we see coalition airstrikes that smack of violations of the laws of war, but we see no investigation into possible violations,” Stork said. 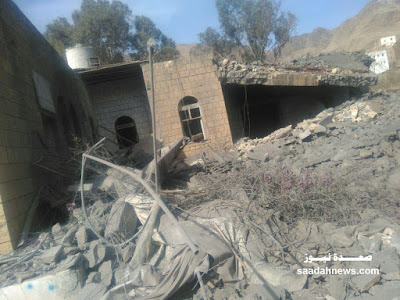 This is the UN Secretary General's Statement:


Statement attributable to the Spokesman for the Secretary-General on Yemen

The Secretary-General condemns the airstrikes by the Saudi-led Coalition that hit the Hayadeen Medical Hospital, run by Médecins Sans Frontières with support from UNICEF and the World Health Organization in Sa’dah governorate. The strikes reportedly resulted in injuries to several people and the complete destruction of the facility.

The Secretary-General calls on all parties to the conflict in Yemen to immediately cease all operations, including airstrikes.


The Saudi coalition blamed MSF for giving the wrong co-ordinates of the hospital. MSF denied this and stated they clearly gave the correct co-ordinates and did so at regular intervals, the previous time just days before the boming. In addition, a large MSF symbol was painted on the roof of the hospital. 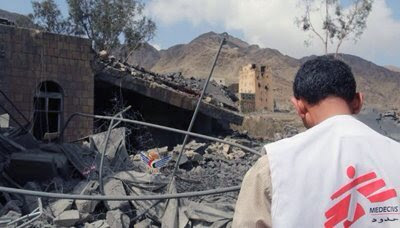 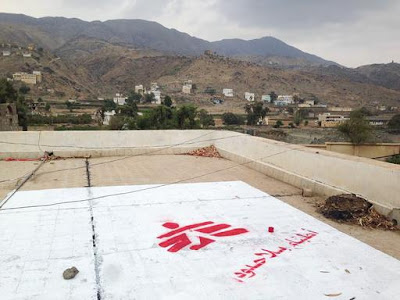 If you have any further information about this incident, such as personal testimony, videos or links, please submit them via this form. All comments will be moderated before being put live and will be kept private if requested. If you prefer you can email additional information to jamilahanan1@gmail.com